Snail and the Angel 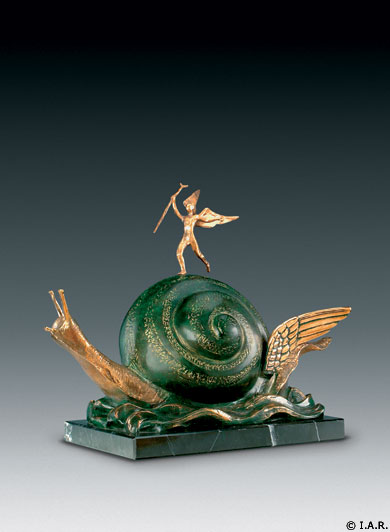 This sculpture occupies an important place in the Dalinian universe, as it is intimately connected with the artist’s encounter with Sigmund Freud, who Dali came to regard as his spiritual father. As part of the early Surrealist movement, Dali was surrounded by psychoanalytical influences, and these ideas were strongly incorporated into his artwork. Dali was captivated when he saw a snail on a bicycle outside Freud’s house, connecting the image of a human head; the head of Freud. It is well known that one of Dali’s more obsessive fetishes is the snail, because it incorporates the paradox of softness (the animal) with hardness (the shell). Paradoxically then, the snail, the universal symbol of the idle passing of time, has been given wings and is riding fluidly moving waves. A winged messenger of the gods, capable of limitless speed, bestows the snail with the gift of motion by touching down on its back for the briefest of moments.